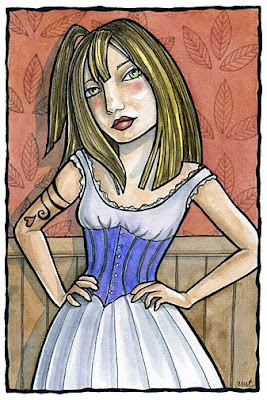 IF word of the week is "Worn" - i was thinking literally about this...about things people wore. i've always been amazed by corsets and why people (because some men did) wore them. and still do. Crazy. All in the name of fashion.

i was trying for a "saloon" look with this young lady, possibly even a little steam punk but it's not quite there...need some metal and ruffles...
Posted by adrienne trafford at 8:54 AM 19 comments: 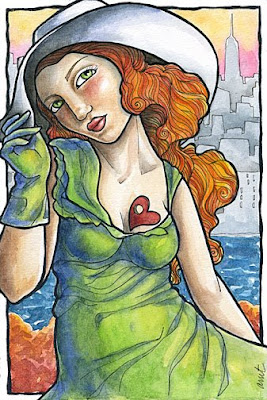 The Hudson drifts behind her...

wow. Two cool words in a row...this week's Illustration Friday word is "drifting"...i kind of feel like i've been doing that myself this whole week - drifting in and out of real world vs. book world. I read The Good Life by Jay McInerney - mostly about what happened to relationships after the twin towers came down. I'm stating the obvious but many New Yorkers (as well as out of towners) were drifting around like ghosts after this happened. Many knew people that were lost, many were almost lost. On my trips to NYC right after this happened i watched the New Yorkers, their sleek urban veneer still intact yet their hearts visibly damaged. You could feel it. I will never forget it. Even as time drifts passed this terrible event.

My young woman (influenced by Tamara deLempicka) is hopeful about going back into the city, damaged heart and all.

Oh what a great word. Maybe it applies to me this week more than the actual illustration. Maybe i'll try to do one that is more apparent. i think i visualize it already.
Posted by adrienne trafford at 9:16 AM 27 comments: 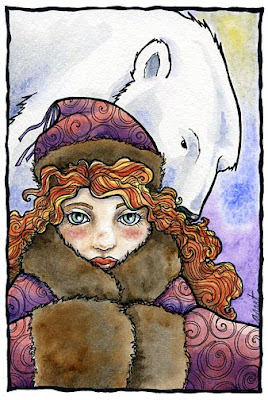 Unfold. Finally a word that really evokes meaning for me. Illustration Friday has been a challenge most of the time for me because i'm not very clever and many of the Illustration Friday words just made me almost give up. But that's the idea, right? To get your mind to work? I didn't really have to work on this one - in fact i think it has been a theme i've been concentrating on since December. To unfold. Unfolding.

That's what a great writer does. That's what Philip Pullman did with His Dark Materials Trilogy. The story was in his head and it unfolded. Into a miracle. Yes i really feel that way. Never have i wanted to be a character in a story more than Lyra Belacqua. What is Lyra's life like now? How has her life unfolded? i think of these kinds of things...thank you Mr. Pullman.

i love this word so much i might try to do more than one...might is key though.
Posted by adrienne trafford at 2:58 PM 21 comments: 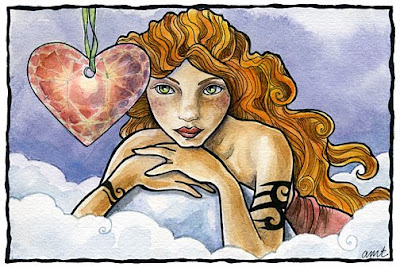 this is kinda corny but let's face it, what do most people crave? why, heart-shaped rubies of course! Ok, not that...we crave love love love...

Thank you to the always inspirational and beautiful Tessa Edwards (xoxoxo!)